Crew Resource Management (CRM) is something we should always DO

I’ll tell you a bit about my experience with Crew Resource Management (CRM). It was an early morning in the crew room. I had just poured my third cup of coffee and sat down at the briefing table together with two of my colleagues. As a line-check captain, I was going to do my co-workers yearly line check. I knew them both very well and had flown with both of them previously on the line. They were both great guys and good pilots so I expected the check to progress without any problems.

I sat and watched as they were doing their flight planning for the sectors that they were going to fly this day. The captain looked at the first officer and asked how much fuel he thought they should order for the first sector. The first officer looked once more over his papers and double-checked the weather.  He then said that the 2000kg would be perfect! The captain thought about this and said “-I’d would rather take 2200kg, just in case.” The first officer said “-Sure, whatever you feel comfortable with” and then he smiled. I could tell that something was wrong… 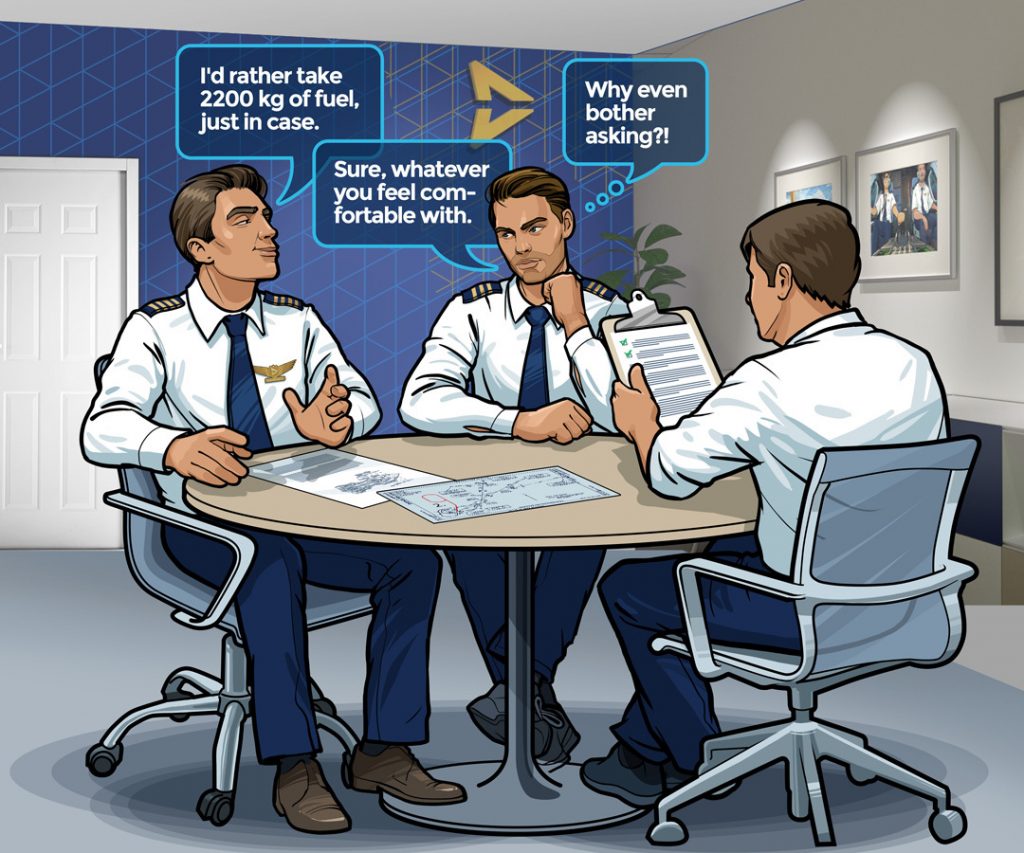 Fast approach? Would you call for go-around?

Up into the air, we went and, just as expected, they both performed fantastically. They followed the company standard operating procedures and handled the aircraft perfectly. The only thing I noticed was that the first officer, whom I had known to be a very chatty and outspoken young man, was unusually quiet. The captain was the pilot flying and on the approach into our destination he came in a little too fast, not a lot but fast enough for him not to be able to get the final step of flap down in accordance to our procedures. This meant we were unstable at 1000ft according to our stabilized approach criteria and this should have, of course, generated a go-around. The captain fixed it and got the speed and flaps down just moments later and performed a safe landing. However, according to my zealous opinion, this should have been a go-around.

I was not extremely surprised by the captain as he did have a reputation among the first officers of flying fast on the approach. It was, however, a line check. You would think he would have tried a little bit harder. Everything else he did was according to our procedures so why did he choose to fly this approach fast? I was, however, more surprised by the first officer and that he didn’t say a word. He should have called a go-around! This was not the person I knew. He was always very good at calling out any deviation from our procedures. I had flown with this guy for many hours and I always found him very reliable. He was always watching my back and letting me know if something was out of the ordinary. His silence really caught me by surprise.

"...he hated to fly with him because no matter what suggestions or ideas you brought forward, he always had to have the last word."

After the flights, I had a debriefing with the crew. Without going into detail, you can probably guess what I said. The captain was fully aware that he was a little too fast and tried to get away with it by giving me a great smile and saying, “You know how it is… the passengers want to get there on time!” The first officer added that he thought the captain had it under control, as usual. This was an odd comment and not like him at all. Afterwards, I asked the first officer to stay as I wanted to talk with him alone. I told him that I didn’t recognize his behaviour. He then replied that even though he actually liked this captain as a person, he hated to fly with him because no matter what suggestions or ideas you brought forward, he always had to have the last word. 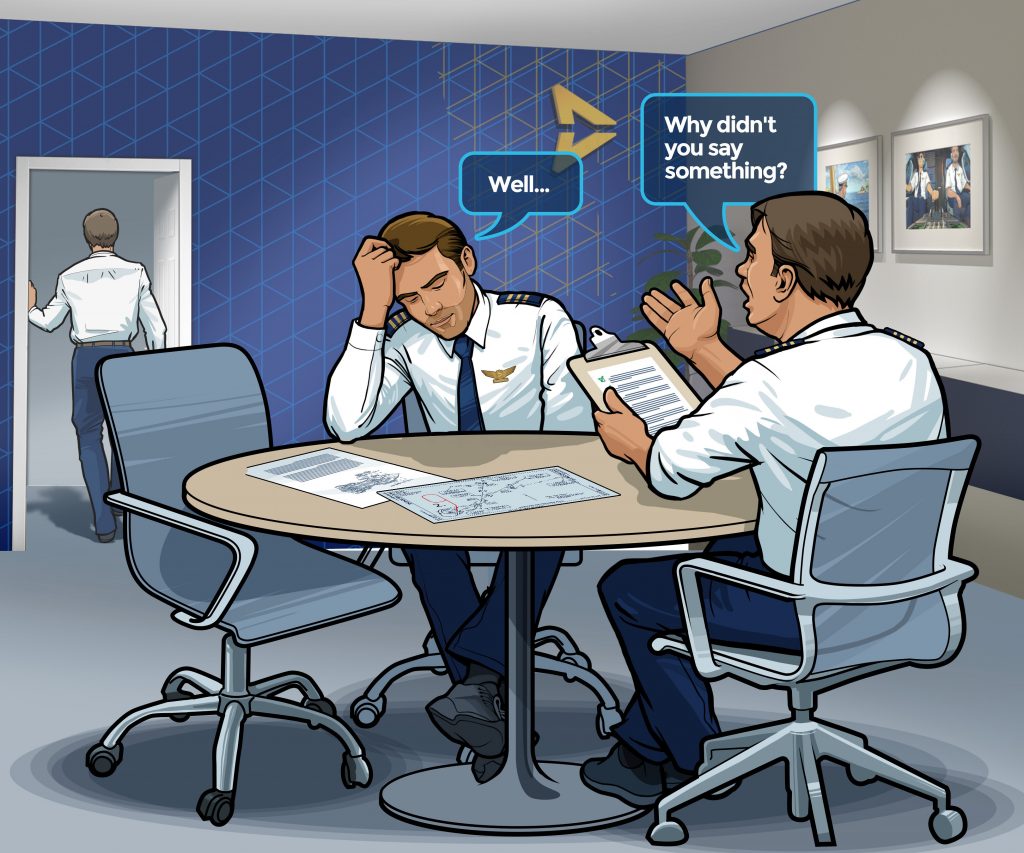 He would never have done it. He would just have said, 'I got this, don’t worry!' Better to be quiet and hope that you didn’t see anything, but of course, you did.”

“Just look at this morning. The captain asked me about how much fuel we should carry. I told him 2000kg and he corrected me and wanted 2200kg. We both know that 200 kg would not make any difference and the weather was fantastic. There was no need for another 200kg. He just needs to have the final say. Why does he even ask me? I guess it’s something he learned in CRM, that you always need to involve your crew, good for the teamwork, right? But what involvement and what teamwork is it when he always has to correct every single input I give him. So, that is the reason I did not call a go-around. He would never have done it. He would just have said, ‘I got this, don’t worry!’ Better to be quiet and hope that you didn’t see anything, but of course, you did.”

In one sense, the first officer was the good team player in this scenario, trying to ‘protect’ the captain on the line check by not making a call-out that he knew the captain would ignore. By being a team player and keeping a good ‘CRM atmosphere’ he actually undermined the safety of the flight.

I thought about this a great deal. We have CRM training to enhance our safety. Both of these pilots had gone through many CRM training sessions but did they really understand what it was all about? CRM is supposed to increase safety and help us mitigate risks. This is done with help of several CRM topics like Decision Making, Communication, Leadership/follow-ship, Teamwork, Situation Awareness, stress and fatigue and other human performance shaping factors.

I guess these two had heard it all before. The captain even attempted to implement some leadership principles by including the first officer in the decision-making process. It still went really wrong. Why? The obvious answer is when a captain delegates a task, such as asking about the fuel, it’s not okay to override their advice by only 200kg! As long as it is within the safety margins, the captain should just have accepted the first officers decision. By doing what he did he undermined the first officer completely and instead of enhancing the teamwork, he actually made it worse. This first officer who, in my eyes, normally was a real resource and asset was now demoted to someone that only used his CRM skills to keep a good atmosphere in the flight deck.

The knowledge we receive through CRM training is very important. The different CRM topics and elements give us many great tools to enhance our safety. They are, however, just tools. Like a carpenter needs to know how to use a hammer to achieve the best possible results, we also need to know how to use the CRM tools to achieve the best possible outcome! I would like to continue the analogy by saying that if our pilots in this example were carpenters, they took a screwdriver to hammer a nail! They were aware and had knowledge about the tools in their toolbox. Even so, they used tools that were meant for something else.

The sum of our combined CRM skills in the flight deck should be more than 2! What do I mean by that? Well, the captain’s CRM skills plus the first officers CRM skills, 1 plus 1, should generate a result higher than 2. In the case above, the result was barely one and a half! The whole point with a multi-crew system is that our combined effort is bigger than the effort of two separate individuals.

CRM should be a verb, something we do

I’m very careful in using expressions like good CRM, bad CRM, poor decision making or poor communications etc. That implies that CRM is something we have or don’t have. I would instead like to say that we should treat CRM as a verb, something we do. CRM skills are something we are continuously practising and working on. To actively ‘do’ CRM we need a great knowledge of our different CRM tools. We get this through our CRM training. We then must take this knowledge out into reality and try to find the correct tool for the multiples of different, and sometimes confusing, scenarios or situations we encounter every day.

Crew Resource Management (CRM) training will enable us to ‘do’ CRM. This takes practice but the end result, 1+1 equals greater than 2, leads us to safe flights. Maybe we should also look at safety as a verb, something we do. I don’t like to consider safety something we have or don’t have but something we constantly are doing to the best of our abilities and knowledge, every day on every flight. Of course in hindsight, after landing, we can always say that we had a safe flight. We didn’t crash. But to reach this conclusion we must have treated safety as something we constantly were doing.

If we came up to our carpenter when he was hammering a nail into the wall and asked him what he was doing, he probably would not say he was hammering a nail but instead would probably say he was building a wall or a house. To do this, he needs his tools in his toolbox. In the same way, if we ask the pilots in the flight deck what they are doing, the answer should be, “we are doing Crew Resource Management and safety!” To do this, the crew needs all the CRM tools and fundamentals that they have received through CRM training. Hence, CRM training, and the understanding of how and when to use these tools, are the fundamentals of ‘doing’ safety!

Every tool needs to be sharpened, adjusted or repaired every so often. The same goes for our CRM tools. That is why we have Crew Resource Management (CRM) recurrent training! Every so often we take our fine, CRM tools into the classroom, behind the computer screen or into the flight simulator to get them tuned up so that we can return to the air and use them in performing safety to the best of our ability!

The importance of Upset Prevention and Recovery Training (UPRT). A story of a close call, near-death experience!

The Key to great Safety Management System (SMS) is set in the core.

How a pilot with the “right stuff” ends...

2 nerve-racking stories that could have been avoided...

The importance of Upset Prevention and Recovery Training...